I woke up, excited. The day I had a virtual meeting with our Cover girl of my own magazine has finally arrived. The meeting was scheduled at 12 noon. I finished up my morning chores, “It’s only half an hour left!” I hurriedly picked up my hairbrush, combed my hair so that I don’t look like a just woke up kid!

I had so, so much pending, had to recollect the story I read, revisit the questions I had and a lot more. I quickly poured my black coffee in the cup and sat on the sofa comfortably. The iPad was fully charged. “Thank goodness!”

The meeting was just about to start. I sat in the comfort of my cozy living room staring at the screen in front of me, waiting for her to join. A nudge was heard and a beautiful face with short hair appeared on the screen.

A couple of Hi’s and Hello’s were exchanged and she began by introducing herself. “My name is Tanaz Bhathena and I’m a young adult author based in Canada. I was born in Mumbai and raised in Saudi Arabia, where I lived for fifteen years before moving to my current hometown of Mississauga, Ontario. I have written two contemporary novels, A Girl Like That and The Beauty of the Moment. Hunted by the Sky is my first foray into fantasy fiction.”

I wanted to know how did it really happen? what inspired her, what was the trigger? She was quick in responding back. “When I was about five or six years old. I wanted to describe a cloud formation in the sky and put it on paper. I was about eight when I attempted to write an actual story, which I didn’t finish, but had a lot of fun with.”

Choosing the characters is something tricky especially when it comes to writing a Fantasy Novel! She draws her characters meticulously. “I always use a combination of characteristics about people I know in real life to portray my characters—whether it’s contemporary or fantasy fiction. However, none of my fictional characters exactly match these people; most would likely not know I’m writing about them.”

Hunted By The Sky is set in the medieval era. I was curious to know why she chose that time to write a fantasy novel. She was quite excited about sharing her love with history and how she enjoyed reading about the Mughals, Rajputs. “As a teenager, my favorite history classes always involved in medieval India. I was fascinated by stories about the Mughals, the Rajputs, and the Marathas, and was always trying to find out more about the culture during that time period.”

The challenging part was to mix and match the characters and their back stories. “Initially, I found Cavas’s perspective challenging to write. I needed to figure out his back story and how it would fit into the larger plotline. I also had to understand how his arc would develop and change, while also linking it to the book’s themes and also Gul’s arc.”

“I have a question. How do you plan your plot or storyline?” I took a sip of my coffee. “I don’t like outlining books in too much detail as that, for me, ruins an element of surprise in my writing. My process is a lot more organic. I write a few chapters, roughly plan out where the next scenes will lead to and then just let the story flow naturally.”

Not only the history, but the book also is a mix of cultures. On this mix, she explained the reason behind it impeccably. “I am a Parsi or a Zoroastrian of Indian origin. For me, being Parsi has always meant an amalgamation of Indian and Persian cultures. This comes through in all of my books in some form or another. For Hunted by the Sky, it worked particularly well as Persia had a huge influence on medieval Indian culture. Persian was the language of the royal courts, epics like the Mahabharata were translated from Sanskrit into Persian during Emperor Akbar’s time.

I decided to incorporate both Hindu and Zoroastrian mythology in the book and for that I re-read the Mahabharata and the Shahnameh. I didn’t want Hunted by the Sky to be a retelling of mythology, but I did use existing myths as a base to create my world’s stories and magical creatures.”

Why Fantasy? “I loved reading fantasy fiction as a child, but never thought I had the imagination to write a story in the genre. After trying and failing to write a science fiction dystopian novel, I decided to give fantasy a shot again. I also decided to change the setting to one inspired by medieval India—and that’s when I found the story I wanted to tell.

I enjoy reading most genres, but my favorites tend to be contemporary, historical and fantasy romance.”

The Character of Gul depicted in the story is a powerful one. I wanted to know her stint with power. “I think women in general are powerful, but we all exhibit our powers in different ways. Gul is brave, but she also goes through a very traumatic experience at a young age—her parents are killed. Vengeance is what keeps her going and gives her a reason to live.”

Her message to young girls – “Don’t let anyone else define you or your potential. Only you can decide what you are capable of. Write your own story.”

“I feel people often underestimate the strength of women. But you only need to look back into our recorded history to find strong female politicians, warriors and leaders—Nur Jehan, Chand Bibi, Razia Sultana, and the Attingal Ranis of Kerala are some examples. Indian women are often portrayed in singular ways: as devoted spouses and mothers, as obedient daughters. But all women have shades of gray to them—and more than strength, I wanted to depict that reality. People aren’t perfect and women should not have to bear the burden of perfection either.”

“Apart from reading books, I love walking and listening to podcasts. I also enjoy nail art; it’s something I’ve taken up more recently over the past couple of years and it helps me relax.”

About the  favorite books – “ The God of Small Things by Arundhati Roy, Tales from Firozsha Baag by Rohinton Mistry, The Kite Runner by Khaled Hosseini. All these authors mentioned are favorites.

Tanaz was a bit saddened as she finished the book. There was a sense of relief though, but no surprises.

The sadness was due to the fact that she was enjoying writing the book which was finished! “If you think you can predict the plot, you may be in for a few surprises. There are a couple of turns the story took that surprised even me while writing the book.“

On the upcoming plans for movies or web series, she said, “I am currently working on edits for the second book in this series. There are no plans yet for a motion picture/web series.”

The interview ended up with a smile and goodbye’s! It was lovely talking to her. “Finally, time to write the feature!” I finished up the coffee by sipping the last few drops of my black coffee and headed to my desk to begin writing.

This is the Cover Feature of Storizen Magazine July 2020 Issue 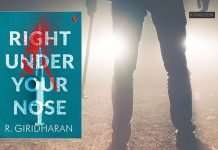