If the cutting viral verbal review of Veere Di Wedding told me anything new, it was the information that Thailand is the destination for the Bollywood-duniya rich to mend their broken hearts. While this may be fact and the rich sooth their broken hearts there amidst unprecedented luxury, I find Thailand has something to offer for all.

This versatile, varied and value-for-money videshi destination is suitable for a person travelling abroad for the first time, someone travelling solo, or people going on a girls/boys-only trips. It is also an excellent destination wedding location while also being great for both budget and luxury vacations with or without family. Really there is something for everyone. I sound like a PR agent for Thai tourism but I speak from personal experience. I traveled there for a six-day vacation with my mum amidst civil unrest when she won a “buy one get one free” (BOGOF) round-trip ticket and tour. Care was taken to ensure our safety, security, and comfort despite the protests – which were very civilized and didn’t involve inconveniencing tourists!

We spent under Rs. 50,000 for the BOGOF holiday package as well as our shopping, gifts and souvenirs. We visited Bangkok, the district of Kanchanapuri for the “Bridge across the River Qwai” and the Tiger Temple as well as the coral island of Pattaya with its pristine white-sand beaches.

Thailand is super tourist-friendly and is especially welcoming to Indian tourists. There are many tour groups and hotels that cater to the needs, whims, and quirks of a typically demanding Indian tourist. But most importantly for the bling on offer at the multiple “gem palaces” across Bangkok and Thailand and cheap and trendy shopping all have an irresistible lure to the average Indian tourist!

The majority of the Thai vacation we spent in Bangkok. The Suvarnabhoomi airport is phenomenal and packed with interesting cultural installations including a massive colourful sculpture of the Samudra Mantan – the churning of the Great Ocean by the gods and the demons in the quest for the nectar of immortality from Hindu mythology as well as a nearly life-size wooden house boat.

The high-points of Bangkok for me were the dinner cruise of the River Chao Phraya with live music (including Bollywood songs) and seeing the lit up palace, temples and monuments lining the river; eating Phad Thai and authentic Thai green curry; an unforgettable and super cheap tuk-tuk (auto) tour of our hotel neighbourhood with stopovers at three “gem palaces”; visiting the temple of the “Emerald” Buddha; shopping at the night market; the friendly and informative local guides; bargain hunting in the shopping complexes (We even came upon an exhibition with a bright red Ferrari!); and wandering around the Palace grounds reliving scenes from The King and I and Anna and the King of Siam. While we didn’t buy any real precious stones we bought lots of really trendy artificial jewelery.

My mother is a vegetarian so in most places we had to make it known and ensure that fish/prawn/seafood paste was not added to flavor “vegetarian” dishes. But the pre-packaged Phad Thai (flat ribbon noodles and vegetables) in the street stalls and markets was proper vegetarian and a boon to my mum!

While we both aren’t keen on massages, across Bangkok there were many spas offering Thai massage at very affordable prices and open-air fish pedicure tanks were ubiquitous in all markets and shopping complexes. If that’s your thing, Bangkok had it in spades. The local Buddhist temples were filled with interesting curios, gold (-plated!) structures, rose and teak wood doors and windows and exquisite mother of pearl inlays and were oases of peace in a bustling modern metropolis.

I traveled to Thailand mainly to visit the Tiger Temple in Kanchanapuri and play with the tiger cubs and handle tigers. So despite the problematic animal rights angle the Tiger Temple was the most interesting part of the trip for me. I fed and played with the cubs for a full 45 minutes and because it was a weekday with no rush I had all the cubs to myself!

The ornate local bus stops were delightful, indicative of the talent for sculpting and carving imbued in the people of the district. Also memorable was the buffet lunch served in a forest camp by the river before we reached the Tiger Temple after the visit to the “Bridge Across the River Qwai” part of the tragic Death Railway built by the prisoners of war during World War II. We weren’t in time to take the short train trip across the bridge as we had to reach the Tiger Temple but that’s also a popular tourist attraction. Instead we walked across the bridge over the rail lines.

We relished all that Pattaya had to offer as well. We took a ferry over to the coral island with a mid-sea stop for parasailing off a floating platform on the sea. After enjoying the wave-less while sand beaches my mother and I opted to take a local public transport on the isle – a shared minivan to visit the coves on the other side of the island as well as a temple with a giant turtle and laughing Buddha atop a hillock. The fresh seafood and the chilled coconut water served in a shaved king coconut were delicious after a hectic day on the beach.

A quick trip on a glass-bottom boat gave us a glimpse of the colorful marine life of the coral reef without having to dive or snorkel, although both activities as well as speed boat and water scooter rides and water-skiing were on offer at very reasonable rates. The Bhat-Rupees rate was a blessing! Onshore that evening we enjoyed the risqué Tiffany Variety Show with trans-women and found it to be more spectacular than the Parisian can-can & cabaret shows!

Although visiting two cities and a district is barely scratching the surface of Thailand it was phenomenal nevertheless. It ensures that we will definitely be going back to see other places like Chiang Mai and Phuket to start!

The story first appeared in the July 2018 Issu of the Storizen Magazine. You can read it here. 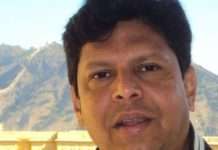