One day, your father wakes up from sleep and asks you to help him find his yesteryear girlfriend. Now, what would you do? Well, the decision depends solely on you, but Ajay, the protagonist of this book, didn’t hesitate to refuse any help to his father. Little did he know that his father would go to the extent of knocking on the doors of his girlfriend Shweta. Once Shweta came into the picture, it became a clash of egos, which was why they broke up in the first place.

Order your copy of the book here – Amazon

Shweta agrees to help Ajay’s father because he should narrate his love story. Ajay’s father decides on her condition, and they all go on a journey of love stories spanning two eras. What do the stories reveal? What is the reason Ajay’s father broke with his girlfriend? Did he also break up because of an ego clash? Was love better in the past than now?

Does love changes from one era to another? It’s a nostalgic, unraveling, soul-searching, and emotional journey of father and son and their girlfriends searching for true love. Would you like to join them? Hop on, you might find what true love is, or instead, you might find yourself.

Jagadish Nadanalli has been working in the Kannada film industry since 2006. Since then, he has written stories, screenplay, and dialogues for several Kannada movies, TV serials, and shows. He self-published his book ‘Me My Friends and an Aunty’ in 2014. One of his short stories, ‘Bachelor and Baby’, had been selected for an anthology, ‘Chronicles of Urban Nomads’ published by Readomania in 2016. His directorial debut Kannada movie ‘Rocket’ was released in 2015. He has also directed a Kannada short movie ‘Lottery’, available on YouTube. Currently, he is working on his next script to direct.

Check out the Discount on Amazon

This story is for every reader who likes a love story with unique story-telling. The language used and the drama in the book is fine, and thus, readers of an age bracket can read it.

The story happens between Shankar, Ganesh, and Chandrika, who represent the first generation, and Ajay, Nevada, and Shweta, who represent the second generation. Shankar is the widower father of Ajay. Shankar and Ganesh are friends from school days. School days. Chandrika was his girlfriend some time ago. The same story in parallel happens between Ajay, Devdas, and Shweta. There is friendship, romance, unconditional love, family bond, emotional turmoil, disagreements, ego clash, and many more.

The story is as entertaining as the title. A good one-time read.

How is the Narration

The narration is engaging and free-flowing without any major twists. In some places, the local language style of narration is used. Some readers may not connect with it. Though this type of narration might be experimental, it can be a speed-breaker to the readers. Other than this, the story is a fine read.

Get an Offer on Amazon

Apart from the main characters, the father and the son, the other characters, specifically, each girlfriend, are very interesting. The son showcases the common and judgemental traits of the conditioned human from the closed Indian society. The intelligent father and his formulas against his son’s ideas are entertaining to read. The characters have equal importance, scope, and space in the story. The son’s personality will help the readers understand how not to behave with their fathers to satisfy societal expectations.

The story is a straight drama with free-flowing language. But to, maintaining the same pace with simple writing is also a complicated issue at times. Here, author Jagadish impressed his readers in achieving this near to impossible feat. As the story progresses at its own pace, things happen, and the drama gets stronger. Little nuances, some conversations, and other gripping elements are included well in manner.

Simple, colloquial, and easy language with good vocabulary is found in the book.

1. The love story between two couples belonging to different generations.
2. The title and the cover of the book.
3. The simple story with many unseen complications and the manner the characters deal.

What Could Have Been Better

Some places in the story looked dragging. Crisp editing would have solved this.

The story has undoubtedly some funny and profound moments to think and understand; thus, the book is entertaining! 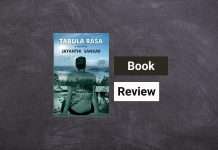